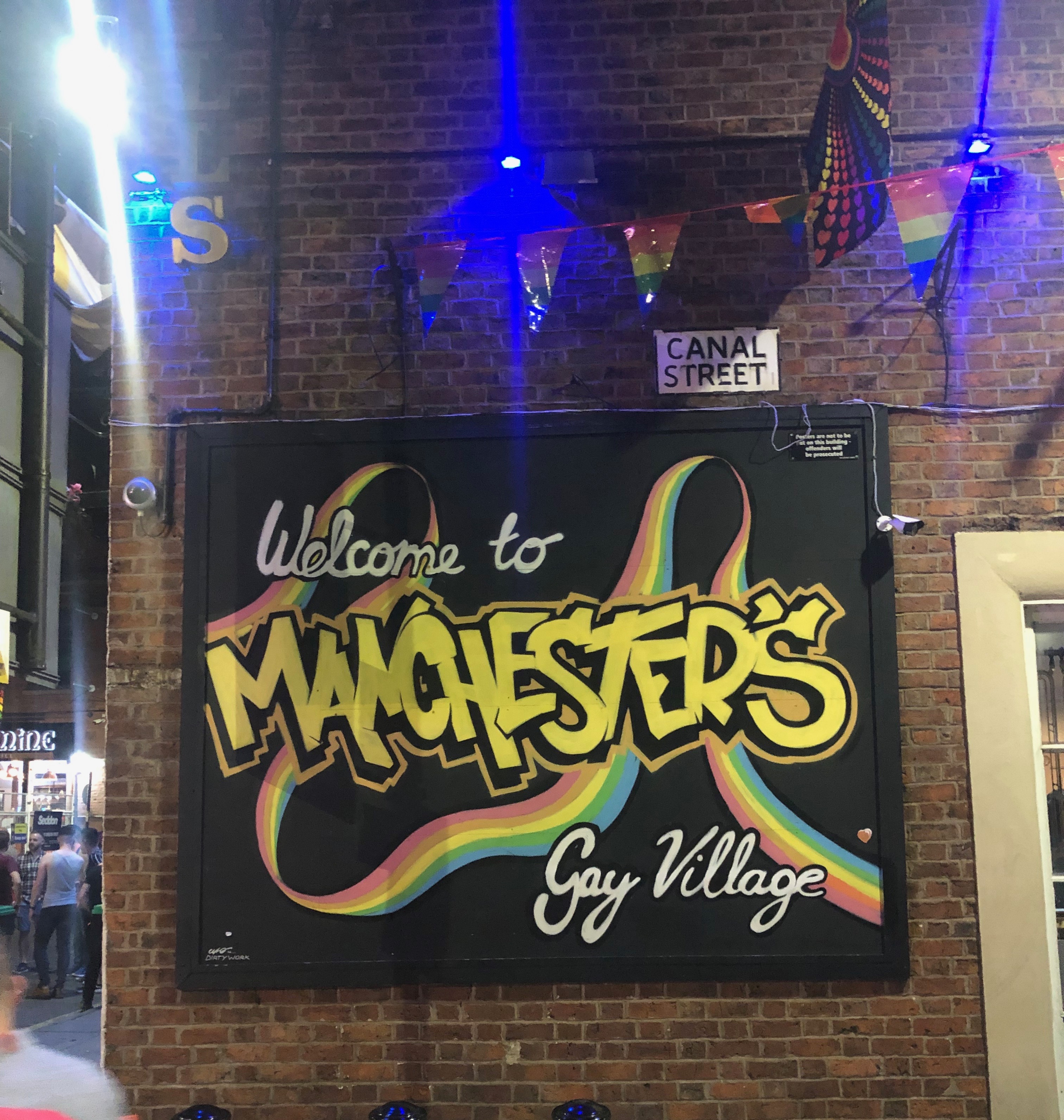 This weeks post is all going to be about my time at Manchester Pride. It’s been a two weeks since Pride but I’ve on;y started to feel normal now haha!

How we got there

We flew with Ryanair from Dublin to Manchester the week that the British based pilots were due to strike and OF COURSE the Irish ones were going to strike. Luckily that was called off and with that, a MASSIVE weight of stress was lifted off my shoulders.By the time I had paid to check in my bag, get priority (Ryanair make this cheaper than normal boarding for some bizarre reason) and reserving a seat, I had spent the EXACT same amount of money that I would’ve had I flown with Aer Lingus… 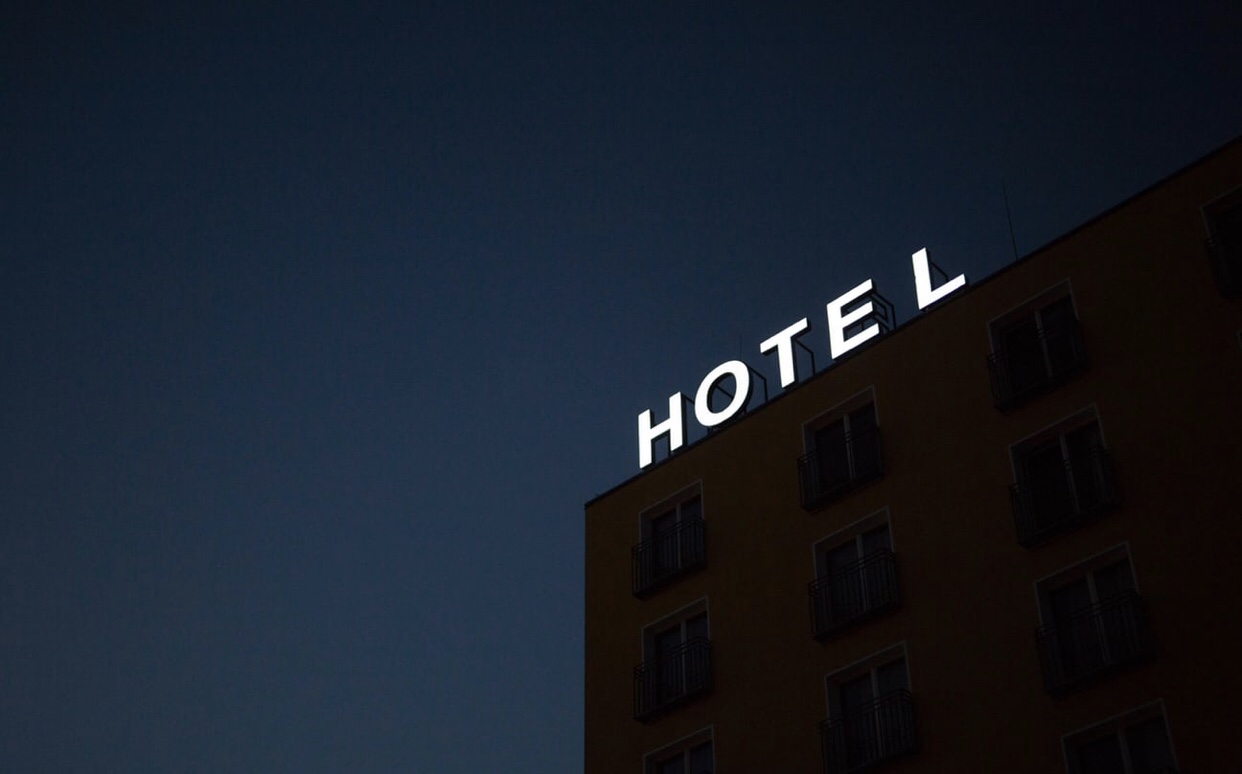 When we had originally planned this trip, there was due to be four of us but one of my friends had to pull out. By doing this, it made our reserved hotel too expensive when split between the three of us so with THREE weeks to go before one of the busiest weekends in Manchester we set out to look for a cheaper alternative. After finding places that weren’t available on those dates, we eventually found a place to stay near the airport but after the first night and realising just how far it was from the Gay Village, I began searching for an alternative which was beyond difficult as not only was it pride on a bank holiday weekend, but it was also the weekend of a United match AND Creamfields so accommodation was either extremely expensive or non-existent.

Luckily I managed to find the SACO apartments a whole THREE MINUTE walk from the gay village and a ten minute walk from Mayfield which was where the main festival was being held. It worked out €14 more expensive then the airport hotel which was well worth it in my opinion. The two bed apartment we had was on the fourth floor and was just far enough away from the main part of the gay village that it wasn’t excessively loud or noisy and to make sure that guests have a good sleep, the bedrooms were soundproofed which was heavenly! 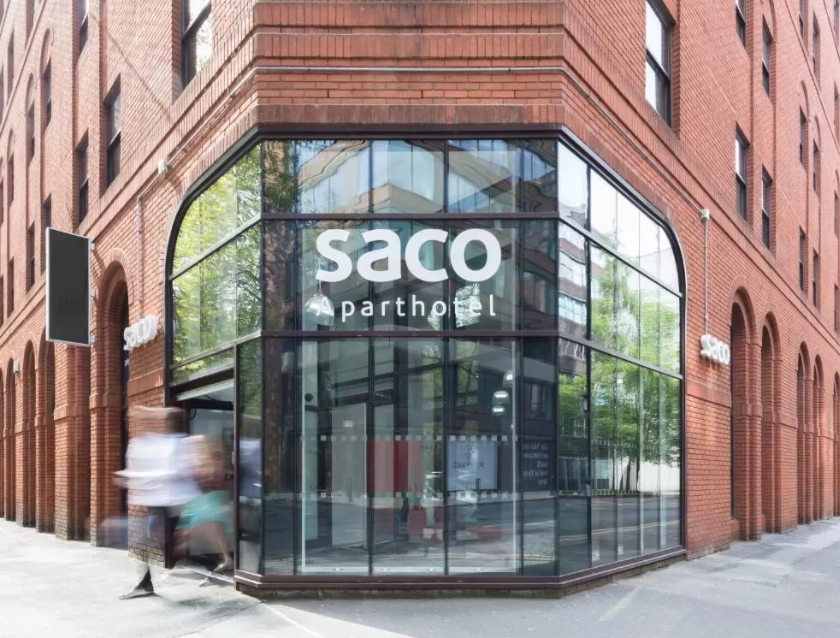 SACO provided everything from free WiFi to a fully stocked kitchen with complimentary cereal, water and cookies (my personal fave) to complimentary L’Occitane toiletries in both the main bathroom and the ensuite in the master bedroom.

If you’re ever in Manchester I honestly couldn’t recommend SACO enough. They not only have a presence in the UK, but also have properties in 17 countries worldwide including Dublin! To have a look at their full list of cities, check out their site where you can get 15% off your next stay with them which is a pretty good deal right?!

Apart from festival food and buying the essentials in a nearby SPAR, on the Monday we ate in a local branch of the popular Slug and Lettuce chain which do lovely hangover food and has a cute, quirky vibe to it. One piece of advice I’d give you guys is to get there early if you eat at a busy time as we had a 45-50 minute wait for food but luckily as we were hungover, we hadn’t the energy to go elsewhere. 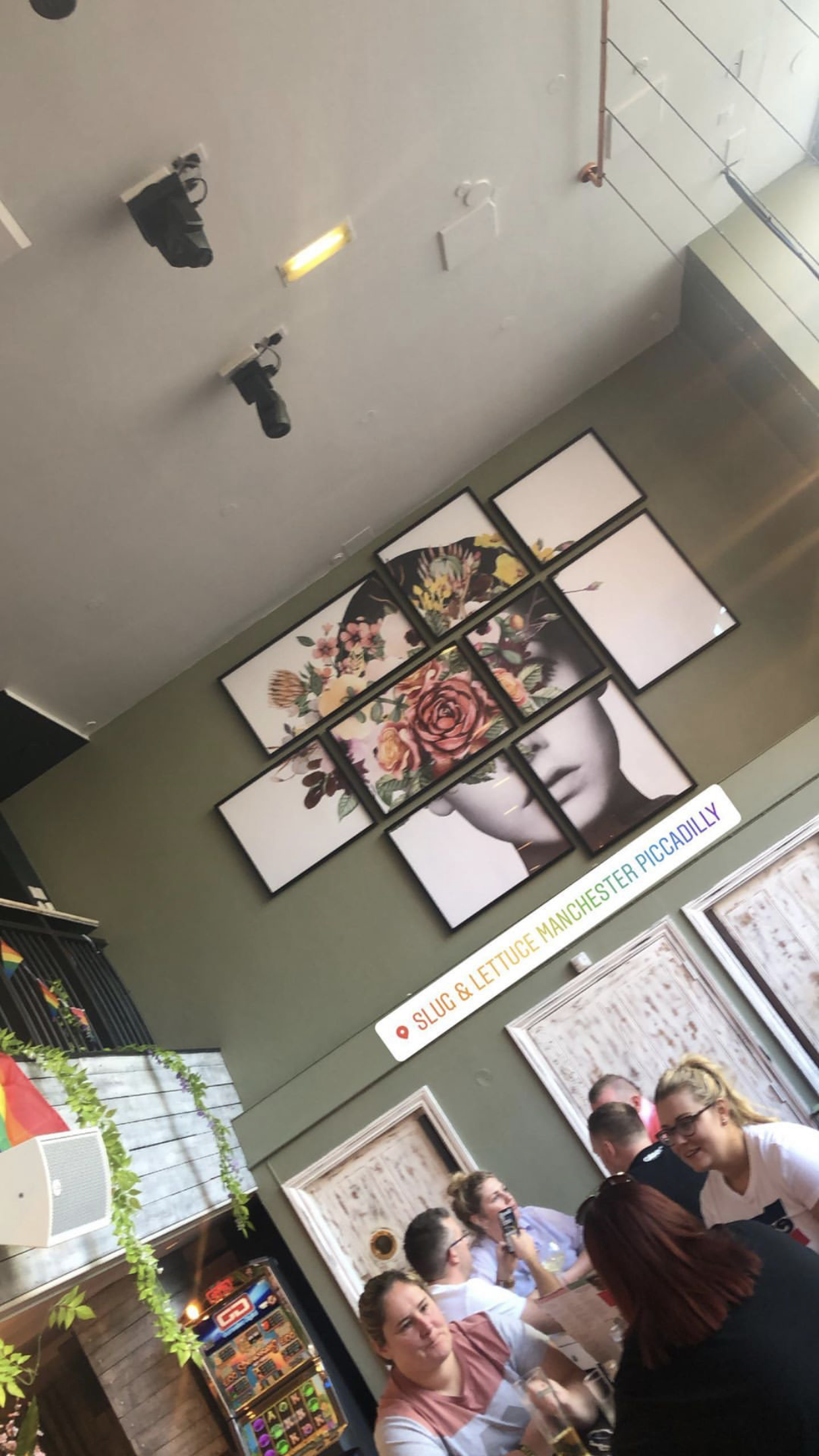 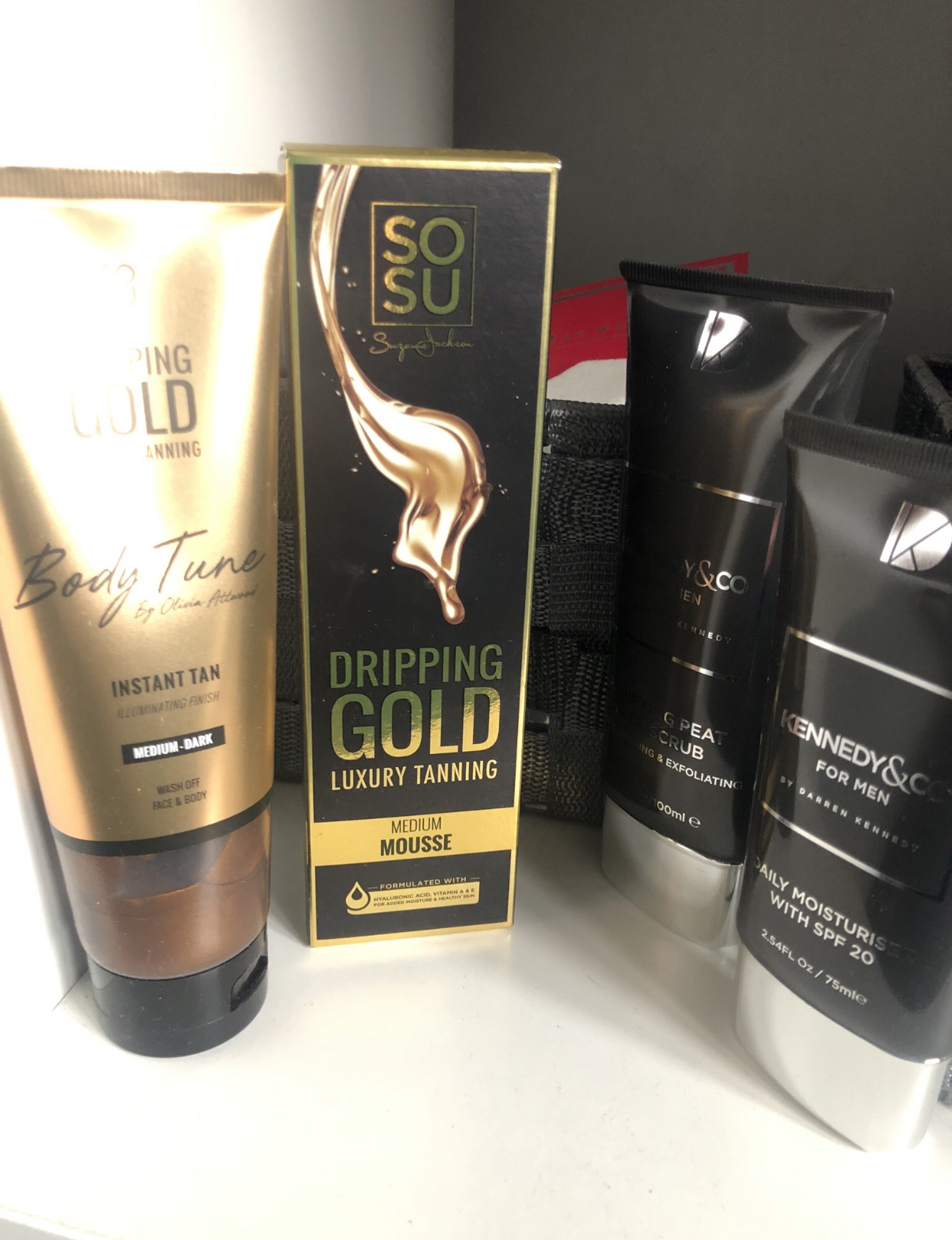 You guys will have seen on my Instagram that this year I’ve decided to live my best bronzed god life as much as possible and have done so with the fab Dripping Gold tan range by Suzanne Jackson. Recently, I’ve been using the Body Tune instant tan that Suzanne has released with former Love Island babe Olivia Atwood. The formula is a beautiful golden color and applies nice and easily! I used it at Love Sensation two weeks ago and couldn’t get over how natural it looked. I picked mine up in Penney’s on Mary Street but noticed their stock level was low so I’d recommend buying it through Suzanne’s website.

I decided this year to take more care of my skin and be careful with the products and treatments I use on it. I started to use the Kennedy & Co range and have previously written about the moisturizer which you can read here. The best thing about the moisturizer is that as it’s under 100 ml , you can bring it in your hand luggage to stay hydrated while in the air.

The Nivea antiperspirant deodorant is perfect if you want to freshen up during the flight or just before you get off. I always get up in the last 30 minutes of the flight and change into lighter clothes and freshen up a little before we land as you usually have to wait awhile for your bags and the if you need a shuttle bus/taxi to where you’re staying.

With the number of sexually transmitted infections (STIs) increasing in recent times, it’s important for both your health and your partners that you have safe sex. I always carry a condom in my wallet and you should never presume that your sexual partner has one on them so it’s best to carry them with you and always take your sexual health seriously and get regular check ups at your local GP or in one of the many sexual health clinics around the country. 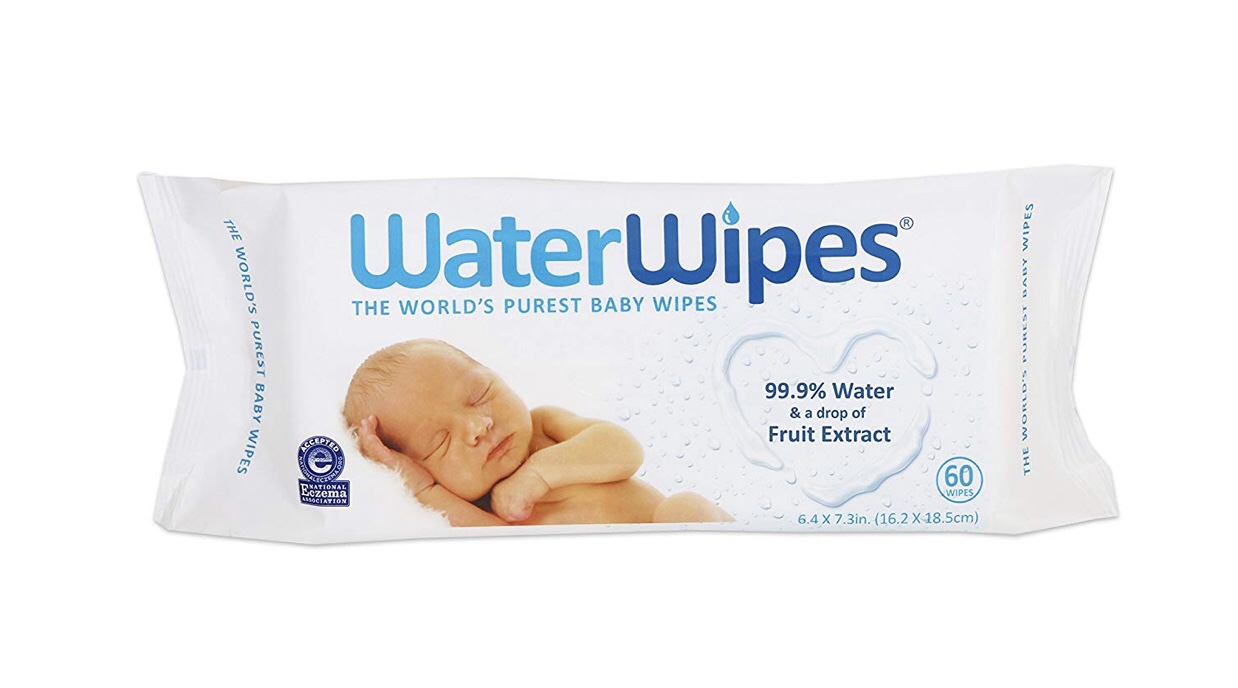 Regardless of your age, you’re never old enough to need a baby wipe just in case you spill something on yourself because lets be real here, we never really grow out of being messes, with food or otherwise.

As someone who has regularly dry lips, I carry small tubs of Vaseline with me REGARDLESS of where I go. I had one tub in my bag and weirdly enough, they’re counted as liquids? Manchester Airport security were not too happy to find that I had not one, not two but THREE tubs of Vaseline in my bag which really goes to show just how bad my Vaseline addiction is… 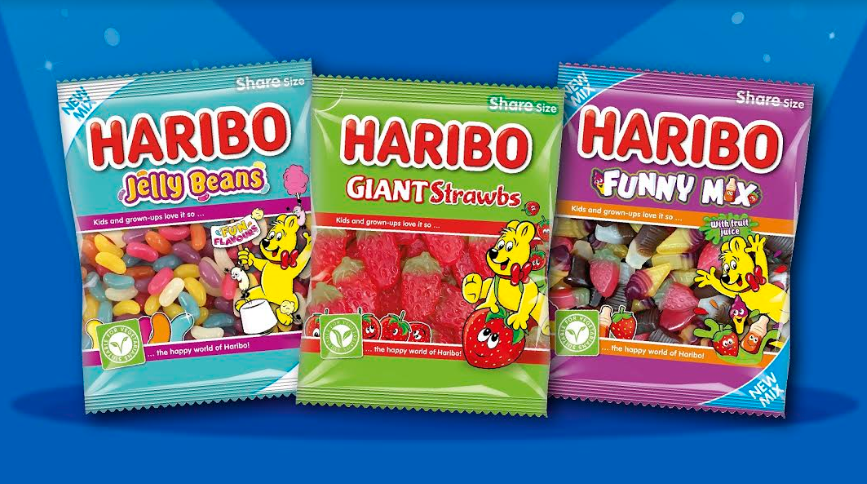 No matter how long a flight can be, I’ll always need snacks and sweets for travelling! I brought the newly released Haribo range of vegetarian sweets with me expecting them to be really different, but they were the exact same!I decided to bring all three packs with me and found that the new range is a fab mix of the old traditional shapes and flavours but with a new addition, the ‘Funny Mix’ as well as the globally loved Jellybeans.The jellybeans have new and juicy flavours, including candy floss, marshmallow, popcorn, peach & passionfruit, raspberry and blackcurrant. A firm favorite of mine are the Giant Strawbs with their long-lasting strawberry flavour and unique chewy texture which are the exact characteristics that make both myself and die hard HARIBO fans love these iconic sweets.

Since it was so hot over in Manchester, I wore the lightest clothes I brought with me and as a result, I had about 10 outfits that I didn’t wear and yes before you say it, I did just throw clothes into my suitcase and hope for the best when I got there… 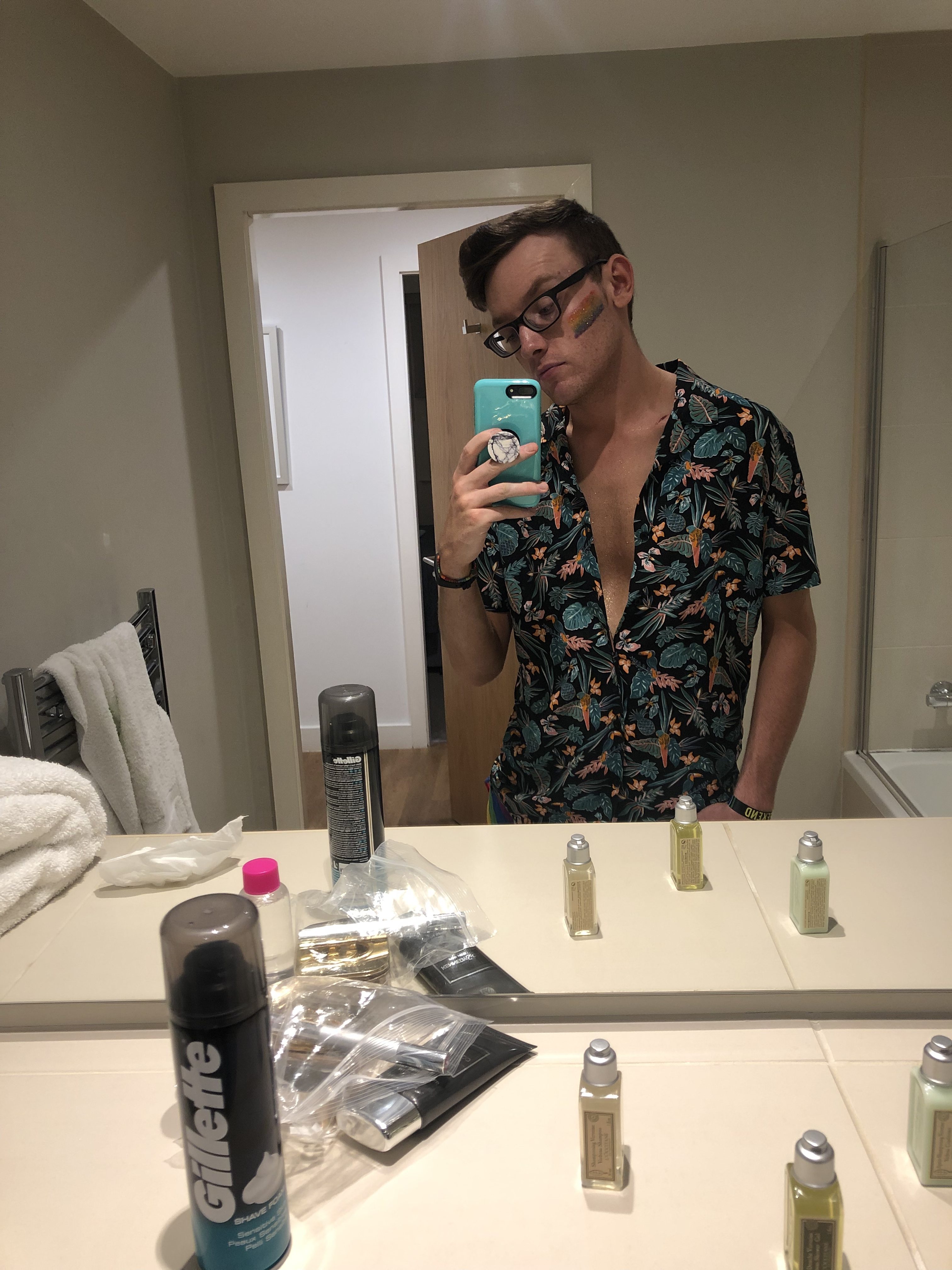 I wore outfits from Littlewoods V by Very collection for day one and River Island for day two. I’m off on holiday in a week so I’ve plenty more outfits for that wish is a blessing. (On a side note, if any of you have any tips on places to eat and drink in Puerto Rico in Gran Canaria slide into my Instagram DM’s please). 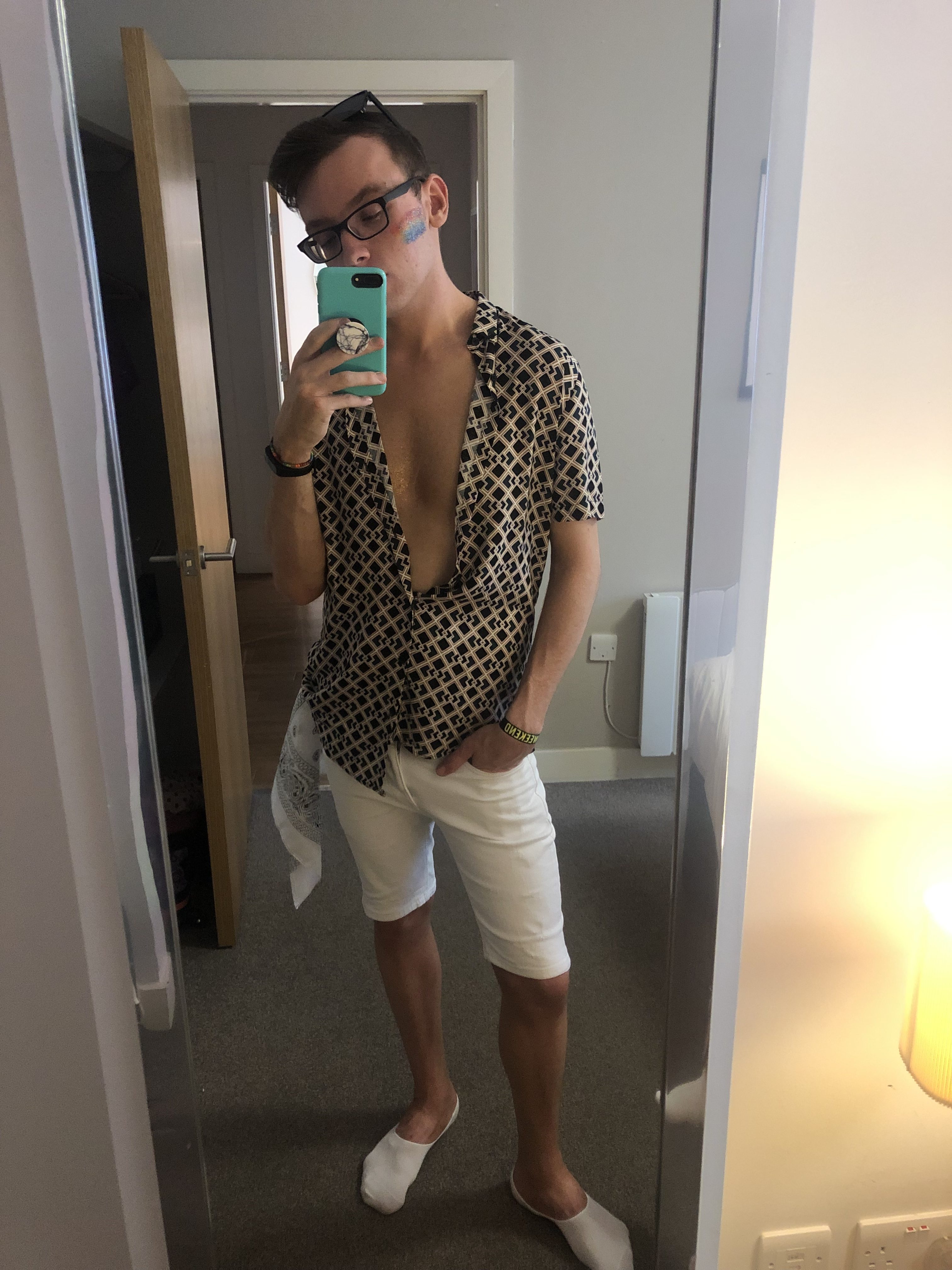 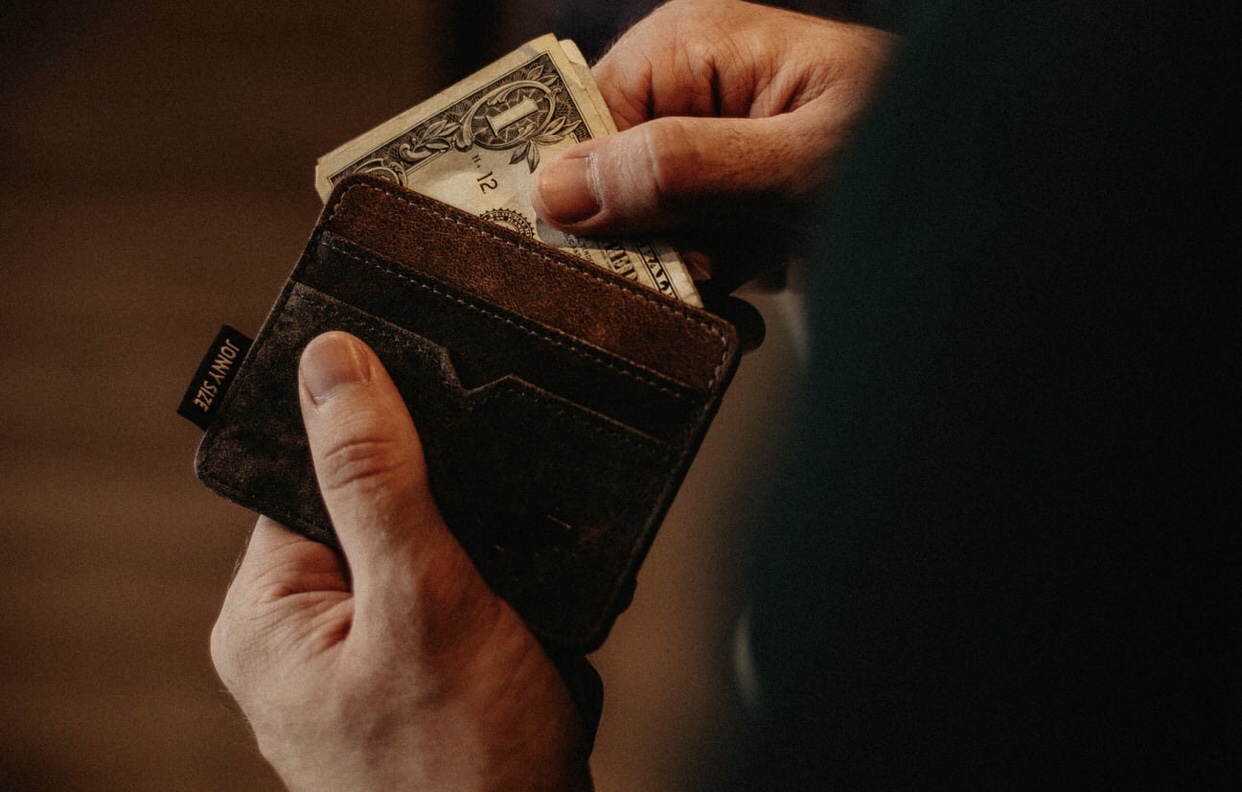 Always bring more money than you’ll think you need when going away as you never know what might happen, I brought about double the amount that I needed as I was saving about half of what I was earning and put it in a revolut account which I then converted to Sterling. I honestly couldn’t recommend Revolut enough! It’s so easy to move money from my main account to my revolut account and absolutely no hassle to convert it to sterling so I could use it with no fees. There may however be a small fee if you use contactless or transfer money from an ATM.

As stated by international flying laws, any toiletires that are over 100ml must be put in your case that is placed in the hold of the plane. Any toiletiries that are 100ml and under can be brought on board with you once they fit in a plastic bag which all airports supply to people if you don’t already have one. I would advise to take more than one plastic bag with you and put the ones you’re not using in your bag before going through security as you’ll have spares for the next time(s) that you travel. Oh, and make sure there is no Vaseline or Sudocrem in your bag as they’re counted as liquids and may be taken off you when your bag is searched. 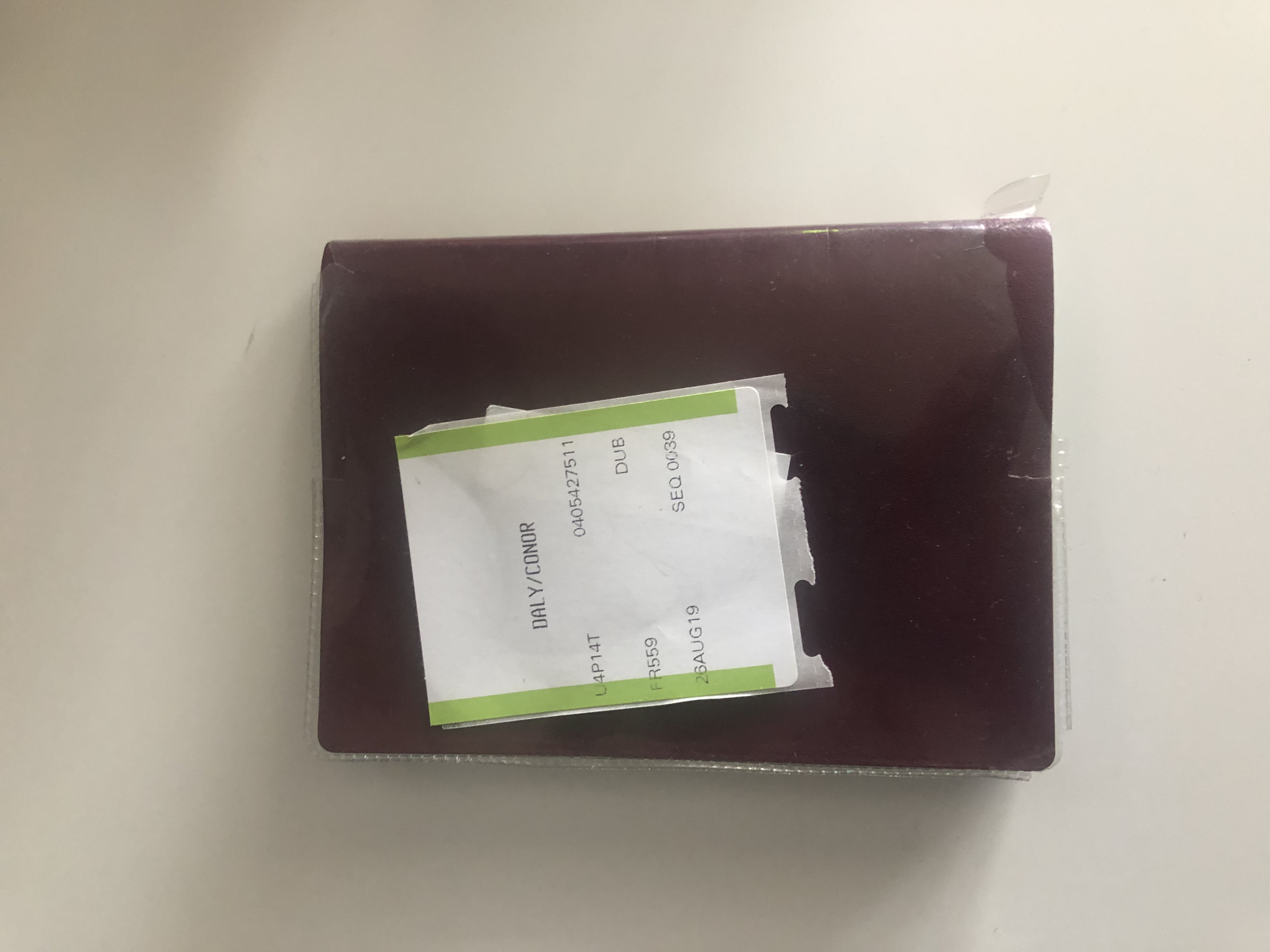 Whether you check your bag in with a desk agent or through one of the self service bag and tag areas, always keep your bag receipt either on the back of your passport or on your phone as you’ll need this should your luggage go missing at your destination.

So guys, that’s everything from my trip to Manchester that can’t be told through the photos and videos that we took that are by far the best memories I have from this trip!