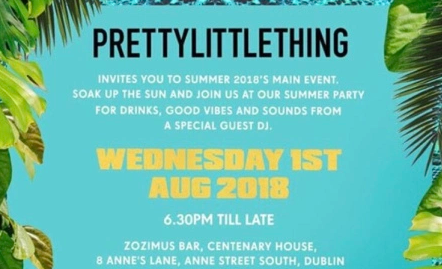 Today’s post is going to be on the Pretty Little Thing Summer Party in Zozimus on Annes Lane, just off of Grafton Street. Last years party was held in The Morgan Hotel. For those of you who don’t know, Anne’s Lane runs behind Cafe En Seine which is currently undergoing an amazing transformation.

Like last year, Pretty Little Thing’s owner Umar Kamani brought more of his celeb pals to Dublin to party the night away in Zozimus and later, Xico on Merrion Row. Kamani brought former TOWIE star Chloe Sims, Coronation and current Celebrity Big Brother star Ryan Thomas as well as Love Island 2016 cast member Kem Cetinay with him to celebrate the Summer in style! Umar LOVES the party atmosphere in Dublin and puts it down to the Irish being up for a good time no matter what!

When we went in, me and Marisa (for those of you who don’t know, Marisa is my bestfriend and event wifey) got some LOVELY PLT themed cocktails and then had the chats and catch ups with some of our friends in the industry who were there too!

At the free bar (when Umar comes to Dublin, he likes to party BIG) me ,Marisa and Marisa’s friend Heather spotted none other then Vanessa from The Saturdays!!! We were starstruck but too nervous (or sober…) to go over and ask for a picture haha!

Once we got our PLT inspired drinks, we headed around the bar to the corner that Umar had cordoned off for himself and his celebrity pals and met MORE of our friends that we had made from previous events. Eventually we copped that there was a photobooth area and we had an absolute ball with it!

Towards the end of the night after we got our goodie bags. myself and Heather were talking to the PR girl for PLT who very kindly invited us to the after party in Xico which was so much fun! Marisa wasn’t feeling too good so went home early but me and Heather bopped on down to Xico and joined Umar and his VIP pals with more free drink! It was actually the same area that he had reserved for the PLT Christmas party where I was dancing on tables and then had to rush home to finish an assignment but that’s a story for another time….

Keep an eye on my Instastories to see my experience on Aer Lingus’ route to Philadelphia as well as what we get up to while we’re over there!
I’ll have another post up later this week so keep an eye on my social media which is linked below!

Til next time,
Conor xo