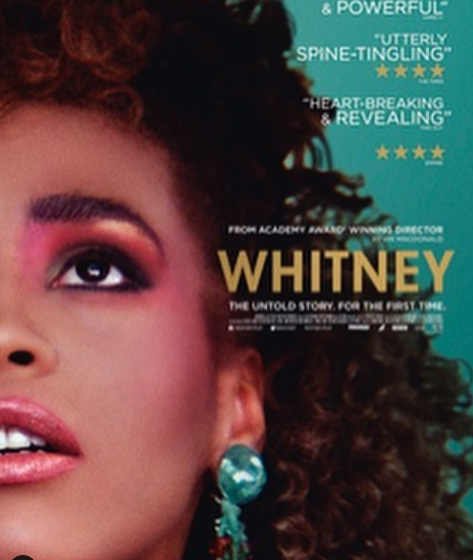 Last week I went to see Whitney in the Savoy Cinema on O’Connell Street. It’s more of a documentary then a movie but still very very good especially if you’re like me and love anything remotely gossipy and nosy haha!
Background
Whitney tells the story of tragic star Whitney Houston who died in 2012 after being face down in her hotel room bath. Toxicology tests later showed she had traces of cocaine and prescription medication in her system. The film, similar to the documentary on Netflix, covers everything from Houston and her brothers experience with child abuse by a previously unnamed family member to people who were present the day that Houston was found dead in 2012 in the Beverly Hilton Hotel on the night of Clive Davis’ pre-grammy party which were due to be held the following night.

The Movie
Directed by award winning director Kevin McDonald, Whitney shows the amazing ups and sad downs that made up Houston’s life. McDonald’s begins the story of her life by talking to Whitney’s mother, Cissy Houston and other members of the church that the Houston’s were members of in Newark and later in New Orange. They talk about her early life and how she started out performing in the church choir and how she eventually went on to sign her first recording contract!

McDonald charts each section of Whitney’s life and interviews people such as her personal assistant, her brother who was also her backing singer and other members of her family as well as musicians who had worked with her mother over the years.

McDonald doesn’t shy away from anything and openly addresses Houston’s toxic addiction to cocaine and shows how it impacted her career. He also interviews her ex husband Bobby Brown and asks him about Houston’s drug problem to which brown says he doesn’t think it’s relevant (funny how he didn’t want to talk about it seeing as her drug problem got worse while they were together…). McDonald briefly mentions Brown and Houstons daughter Bobbi Kristina and how Whitney was adamant that she be brought on tour with her when she was younger. Bobbi Kristina had her own demons in life with a video emerging of her snorting a substance (which later turned out to be cocaine) off an Ipad. Bobbi Kristina was tragically found unresponsive in a bathtub in her house left to her by her late mother and died 6 months later when she was taken off life support.

Having watched the Amy Winehouse movie, I saw a lot of similarities between the two despite the age gap and causes of death. From watching both movies, you can almost pinpoint the moment that both Amy and Whitney could have AND should have gotten help which had they done so, would probably have saved them from the road they both eventually went down…
Don’t forget to follow me on all my social media which I’ve linked below!
Til next time,
Conor xoxo
Twitter: Nagginsnnotions
Instagram: Nagginsandnotions
Facebook: Nagginsandnotions
Depop: Nagginsandnotions

One Reply to “REVIEW: Whitney: The Movie”