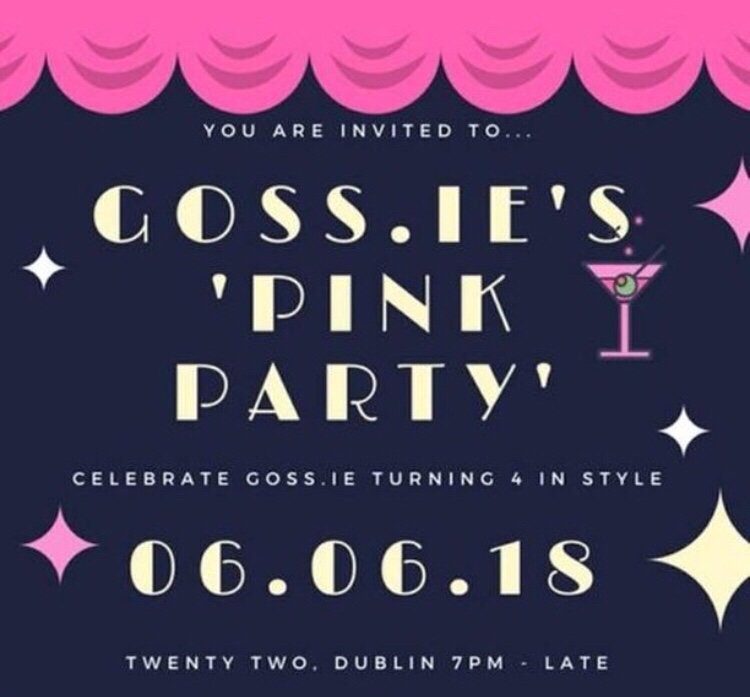 As you’ll have seen on my Instagram recently , I was kindly invited to Goss.ie’s fourth birthday which was held in Twenty Two on South Anne Street .I went to the Goss birthday last year whihc you can read here .

When we arrived, we were greeted with a glass of complimentary prosecco and told that there was free prosecco for the whole night so I was a very happy boy! Goss CEO Ali Ryan made sure everyone was looked after with free donuts and pizza for everyone in attendance on the night!

Guests on the night included bloggers and influencers and celebrities such as Chef Adrian and the fabulous Erin McGregor as well as TV3 and panto personality Alan Hughes and his husband Karl. I somehow turned into my mother’s publicist after I got her favourite TV presenter Alan Hughes to leave her a message and got Erin to follow her business on Instagram…

The night was sponsored by marketplace app DressUp Market which is a super cool fashion listing app where you can list clothes and make a profit at the same time! You can find out more here .
Goss never fail to impress and as well as free prosecco they also had Pizza and donuts from Offbeat which were FAB.After Goss CEO Ali Ryan made a speech welcoming us all, me and my plus one went over to the photo booth and had a great time taking tipsy photos and having fun!

At the end of the night we were given a goodie bag with AMAZING bits in them including a bottle of Cocoa Brown 10 minute mousse, a Pretty Little Thing makeup palette, a gift voucher for the South William Spa and loads more!

I’ll have a few more events coming up throughout the summer so keep an eye out for more behind the scenes event posts!
Don’t forget to follow me on all my social media which I’ve linked below!
Til next time,
Conor xoxo
Twitter: Nagginsnnotions
Instagram: Nagginsandnotions
Facebook: Nagginsandnotions