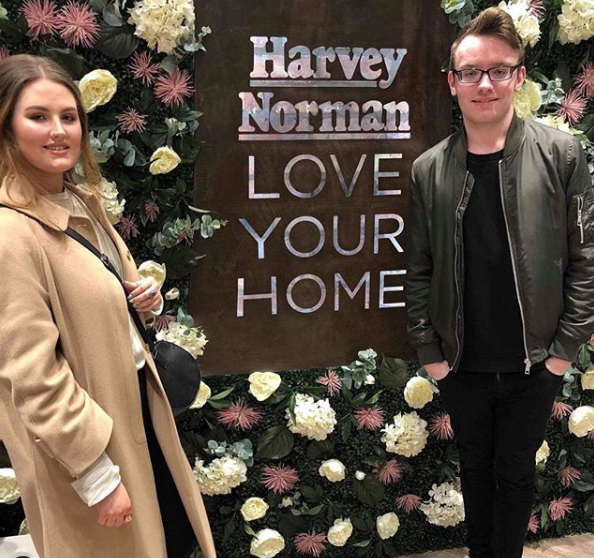 As you’ll have seen on my instagram a few weeks ago, I was invited to the Harvey Norman Spring Summer 2018 collection night in their flagship store out in Tallaght.
This was an exciting event for two reasons- This was the first event where I was personally invited and wasn’t just someone else’s plus one or that I wasn’t working for the agency that was putting on the event. Between that and the fact it was an interiors event and I am OBSESSED (when I say obsessed, I’ve a scrap book divided into different rooms and have cut outs from magazines of furniture and the style of furniture I want in a room!) I was in my absolute element going around their store in Tallaght haha!
When we got there, we were given a map and a voucher for something really cool (which I’ll tell you about later on) and also told that if we wanted to buy anything then we could use the staff discount!
On the night, they had some fab complimentary food and wine for everyone invited!

As well as the gorge food and wine they had a LIVE ORCHESTRA playing music for the guests which was a complete surprise because I thought it was just music being piped through the store.
The voucher we received at the start of the event was for a custom made to measure pillow using their really cool measuring system. We were taken one by one to be measured and then asked which style of pillow (memory foam , feather and down etc) we preferred! I have to say getting a custom made pillow wasn’t something I was expecting at all which makes it even cooler!

To celebrate the opening of their faux flower shop, they had a faux flower bouquet class and let me tell you now guys, if marketing/PR doesn’t work out for me, I’ll have floristry to fall back on 😉

We finished the night by browsing through the electrical section where I happened to see portable chargers and my Penneys 8 euro portable one was beginning to lose its charge so I thought I’d treat myself to a fab black and rose gold one using the staff discount which everyone on the night could use!

When we were leaving we were given a fab goodie bag with little bits in it which was super nice of them! The bag contained fab bits including a B Sensible breathable pillow case, a selection of faux flowers from their new shop, a sample tub of paint from Colourtrend as well as a candle and a bottle of Ellis Egyptian Oil which smells fab!

My next interiors post will be on SS18 interior trends and I’m super excited about that one!
Don’t forget to follow me on all of my social media to never miss a post. I’ve linked them down below!
Til next time,
Conor Xo
Twitter:@Nagginsnnotions
Instagram @nagginsandnotions